Athiya Shetty was all over the news some years ago for her rumoured relationship with American rapper Drake. The actress recently cleared the air about the same by confessing that she is indeed friends with him.

Talking to a magazine publication, Athiya reportedly revealed that the two met at a restaurant in London two years ago, and have been in touch ever since. The actress also added that she often jokes that they are like pen pals because they never really met after that.

Elaborating further, Athiya confessed that she is obviously a huge fan of his music, and even he has seen her movies.

The two were grabbing eyeballs with their social media banters. In 2018, Athiya had shared a picture of herself cutting a cake on her birthday.

Drake took to the comment section and wrote, ‘Happy birthday to my Shetty a true Goddess. Guess who is watching Mubakaran 3 times on the tour bus in your honour.’ 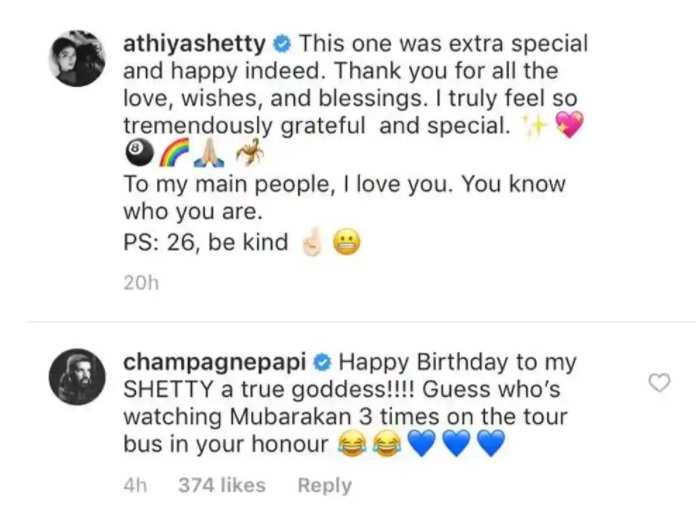 When asked about her current rumoured boyfriend and cricketer KL Rahul, Athiya did not spill out any details but stated that she has nothing to hide but she will never speak about that.

Meanwhile, on the work front, Athiya was last seen in ‘Motichoor Chaknachoor’ co-starring Nawazuddin Siddiqui in the lead role. She is yet to announce her next film.