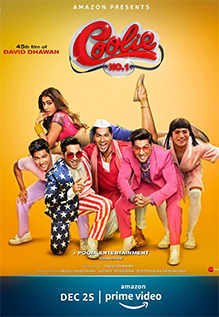 STORY: Coolie Raju impersonates a rich prince to get the love of his life Sarah. But all hell breaks loose when his real identity is exposed.

REVIEW: It’s love at first sight when Sarah’s (Sara Ali Khan) picture lands up in Raju’s (Varun Dhawan) lap. A coolie by profession Raju wants to make Sarah his wife, by hook or by crook. This ties in very well with Pandit Jai Kishen’s (Javed Jaaferi) revenge plan on Sarah’s businessman father Jeffery Rozario (Paresh Rawal), who had insulted Kishen for bringing him a rishta that wasn’t of his own social status. And thus begins the charade of Raju posing as the prince of Singapore, to lure Sarah and her family.

Director David Dhawan and his screenplay writer Rumi Jaffrey do not alter the script in this remake of their 1995 blockbuster with the same name, but this 2020 version has everything glossed over. And the scale is bigger but definitely not better. Varun Dhawan slips into not only Govinda’s shoes but also spoofs his way to glory, imitating almost every iconic actor of our times. From Amitabh Bachchan, Shahrukh Khan and Nana Patekar to finally Mithun – Varun’s only brief it seems was to make no sense of his act at all, be completely over-the-top and just have fun with whatever he is doing. For some odd reason though, his skin tone keeps changing. Sarah Ali Khan looks all glammed up and gorgeous, but that cannot eclipse the need for her to really work hard on her comic timing. Not that she has a lot of scope in this all male show. Thankfully, we have some ace comedians here to save the day, somewhat. And leading among them is Johnny Lever. The man makes you laugh no matter what he does onscreen. As the bumbling police officer Inspector Godbole, Lever is in top form and surprisingly the only voice of reason here. He is the only one who can tell that Raj and Raju are indeed the same person…duh! This double role business seemed like a stretch even in the nineties, but David Dhawan and his team just roll with it, perhaps thinking that infusing sanitized shots of cities, a visually rich colour palette and some designer couture would do the trick. Well, it doesn’t quite do it for us.

We also have Paresh Rawal (as a Goan catholic) always crooning a Goan song when he is happy and saying, ‘Heavens in the dock,” when he chances upon an idea. It’s really the innate ability of the actor to make such ridiculous parts entertaining. Jaaved Jaafferi and Rajpal Yadav are also good additions for some harmless fun, but we wish we had more of these real comedians. The track of Sakshi Talsania and Sahil Vaid’s romance comes across as forced.

The film’s music is surely not bad to listen to and the songs are well-shot with all the pomp and show in place. It makes for a good watch, but the ‘Mirchi lagi’ song deserved a much better remake. Oh and that’s true for the film as well.