Ananya Panday has the sweetest birthday wish for cousin Ahaan Panday; says ‘you know how much I love you’ – Times of India

Actress Ananya Panday, who was last seen in ‘Khaali Peeli’ with Ishaan Khatter, is quite active on social media. She often treats her fans with amazing posts on Instagram. Today, she took to her handle to post a sweet birthday wish for her cousin Ahaan Panday.

She shared a cool picture on her Instagram story and also penned a heartfelt note for him. Twinning in white, the Panday siblings look absolutely stylish in the picture.

Along with the picture, she wrote, “Happy bday Ahaani! You know how much I love you @ahaanpandayy” followed by a heart emoji. She also reposted a picture from her mom Bhavana Pandey’s story where the brother-sister duo can be seen sitting on her stomach. Ahaan and Ananya look aww-dorable in the childhood picture. Have a look: 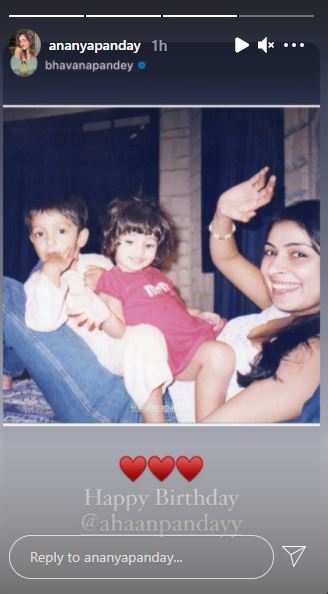 Meanwhile, there were reports that Ahaan is all set to make his Bollywood debut soon. A lot of speculations are rife but the star kid hasn’t confirmed anything yet.

On the other hand, Ananya was busy shooting for Shakun Batra’s next in Alibaug recently. She will be seen uniting with Deepika Padukone and Siddhant Chaturvedi for the first time. The trio wrapped up the shoot in Goa amid the new normal and started shooting for another schedule in Alibaug. Apart from this, she also has a Pan India film titled ‘Fighter’ with Vijay Deverakonda.

Facebook
Twitter
Pinterest
WhatsApp
Previous articleExclusive! Prateik Babbar opens up about his quirky style: It’s an expression of my art, creativity and identity – Times of India
Next articlePooja Bhatt opens up on quitting alcohol four years ago: What an enriching, searing journey it has been – Times of India