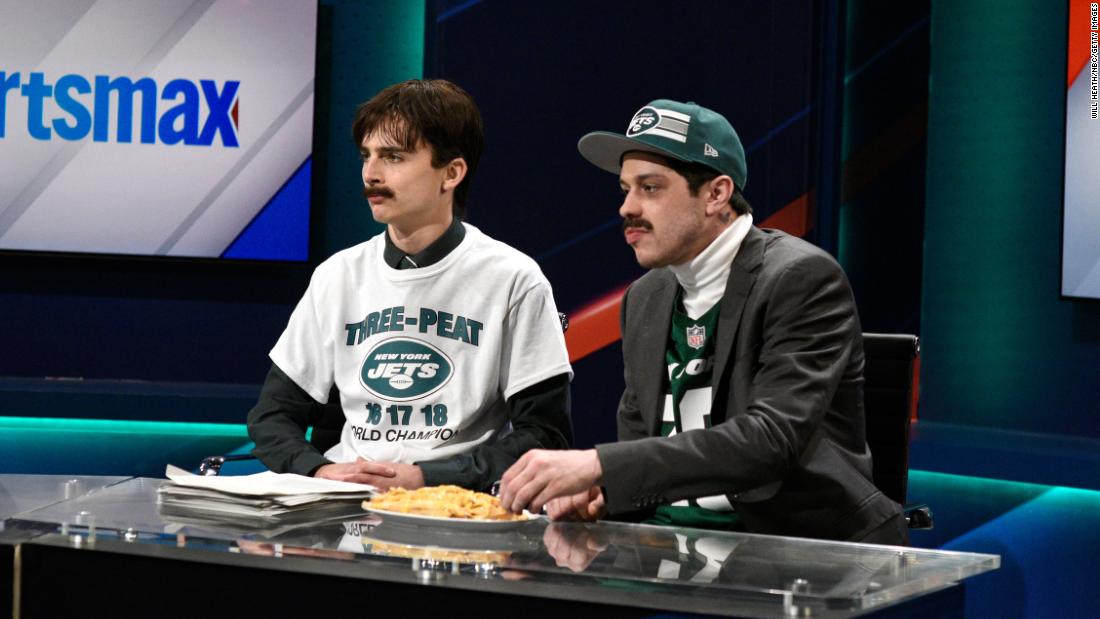 The skit opens with a voiceover, saying, “Millions of real Americans are switching from Fox News to Newsmax because Newsmax tells them the truth — that Donald Trump could still win this election.”

Then, the skit introduces “Sportsmax” — a sports network that refuses to acknowledge that the New York Jets ever lose a game.

Timothée Chalamet and Pete Davidson are introduced as Jets experts, named Deluca and Delvechio, with a voiceover lead-in that says, “Finally a network that understands that real fans don’t give up on their team, no matter what.”

Moffat says “It’s been reported that on November 29, the Jets lost to the Dolphins 20 to three.”

Davidson then pitches in, questioning the scoring of the game, saying, “Who did the scoring?”

“I have in my hand right here, sworn affidavits from 500 Jets fans who swear they witnessed the Jets win,” Chalamet yells passionately.

Davidson backs him up saying, “There’s eight million Jets fans out there. Eight million. they have nothing to gain by lying about this.”

The truth is the Jets have lost every single one of their NFL games this season, and Trump lost the election. Biden is moving into the White House in January. The sketch is a thinly veiled mockery of Trump supporters who refuse to acknowledge that.

More than a month after the election, Newsmax continues to falsely claim that President Donald Trump won the 2020 election, and the channel’s ratings have surged in the process. Trump has been promoting the channel on Twitter. In a November tweet, Trump said Fox News daytime “lost their ratings” and encouraged his followers to “try @OANN & @newsmax.”