10 Years Of Ranveer Singh: From ‘Murad’ in ‘Gully Boy’ to ‘Kabir’ in Dil Dhadakne Do; 10 Phenomenal characters portrayed by the actor – Times of India

10 years ago, a fictional character named Bittoo Sharma went on to grace the silver screen for the first time grooving to the tunes of ‘Ainvayi Ainvayi’, successfully cultivating a special place inside the hearts of movie lovers. Ever since then, that Bittoo Sharma becomes Peshwa Bajirao to finally become our most loved gully boy. While these characters are so believable and breathable, it was Ranveer Singh’s impeccable acting that made sure these personalities aren’t devoid of depth. Today, it’s an undeniable fact that every time Ranveer Singh’s name glistens on the screen, there’s reliance, trust and always a ‘
paisa-vasool’ moment for audiences and critics. With time, the star actor has made sure to make heads turn with his on-screen energy and power-packed performances allowing us to connect and resonate with him. Be it portraying the historical characters like ‘Alauddin Khilji’ or being the fictional characters like ‘Kabir Mehra’, Ranveer’s performances have created an impact on us. He has surely crafted a niche for herself, among other star celebs. Ranveer was last seen in Zoya Akhtar’s ‘Gully Boy’ alongside Alia Bhatt and Siddhant Chaturvedi. He will soon be seen in Kabir Khan’s 83’ alongside Deepika Padukone. As he completes a decade in the film industry today, here’s to revisiting 10 phenomenal characters brought to life by him.

Inspired by Jeffrey Archer’s novel ‘Not a Penny More, Not a Penny Less’, the movie portrays Ranveer Singh as a conman who tricks women for their money until three of them unite together to con him back. While tricking the women, Ranveer portrays the role of a boyfriend named Sunny, an art gallery owner named Deven Shah, a business dealer named Iqbal. Each of these characters was highly well defined and described, for which he received several accolades and praises. Helmed by Maneesh Sharma, the movie also starred Parineeti Chopra, Aditi Sharma and Anushka Sharma in pivotal characters. 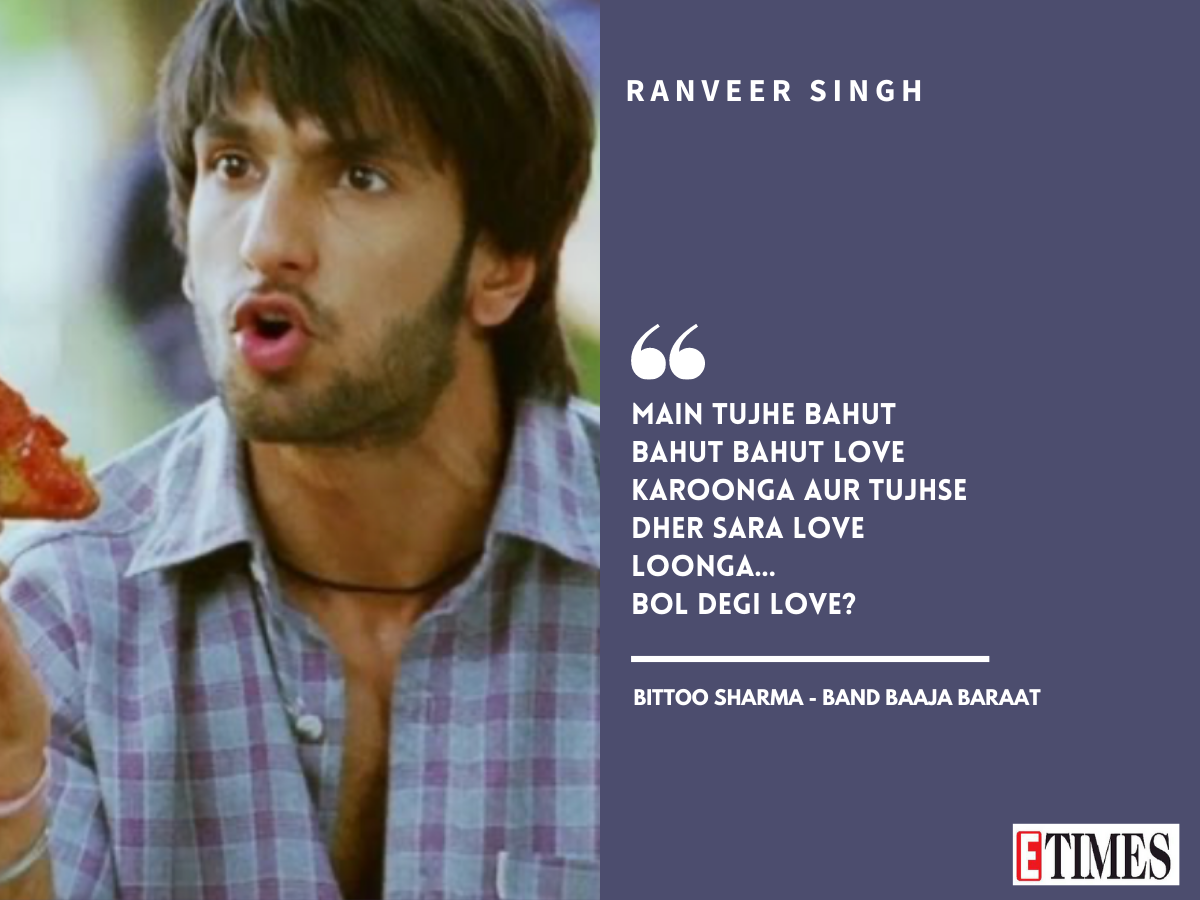 This was Ranveer’s first film. The Maneesh Sharma directorial featured him as a college drop out who is seen teaming up with Anushka Sharma who plays the role of Shruti Kakkad – an ambitious street smart personality, to run a wedding business with pomp and splendour. Both as, wedding planners make marriage ceremonies memorable. Ranveer was seen mastering every nuance with perfection and ease bringing so much to his role. The movie was a box office hit. 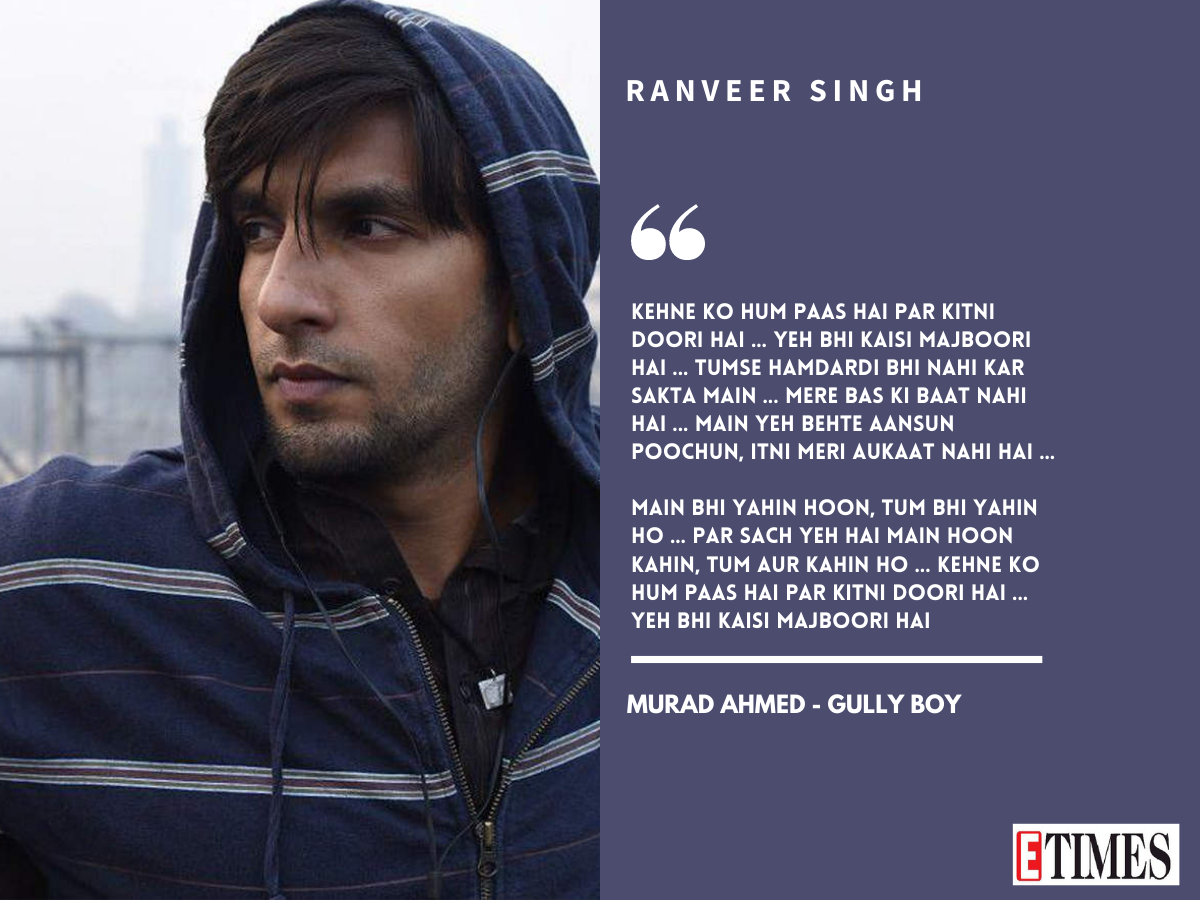 Zoya Akhtar directorial finds Ranveer portraying the character of Murad Ahmed, a final year college student, living in the Dharavi slums of Mumbai. Staying in an abusive household, Murad looks out for doing odd jobs for the sake of money and escape. Along with this, he also nurtures a craze for rap music. He soon begins to write lyrics inspired for the inequalities he observes during his job as a part-time chauffeur. With time, he gets in touch with a famous local rapper Shrikant ‘MC Sher’ Bhosle (Siddhant Chaturvedi) who mentors him to lead his path towards success. Not forgetting his longtime and possessive girlfriend Safeena ( Alia Bhatt ) who sticks by him during his struggling days. The movie also starred Kalki Koechlin as a musician who played a significant role. 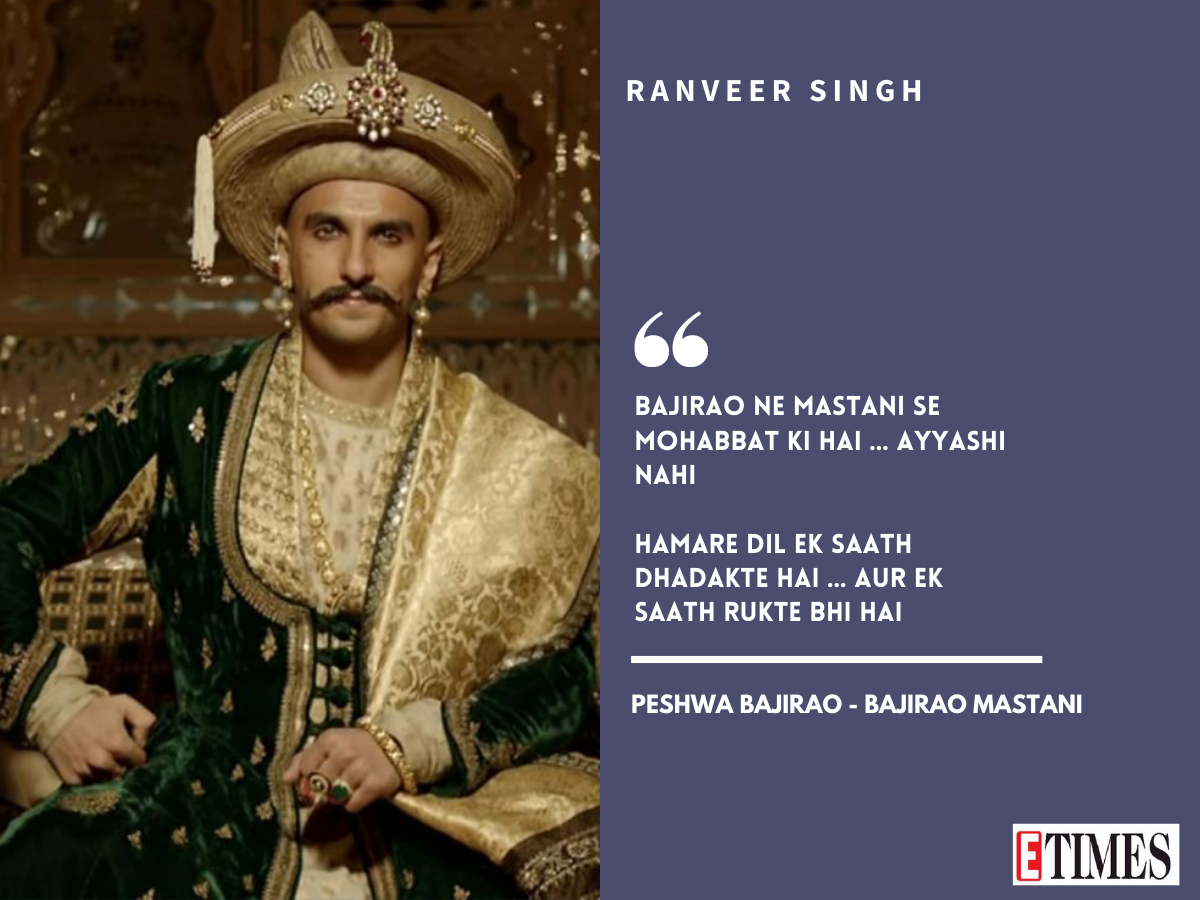 Ranveer’s portrayal as the Maratha emperor – Peshwa Bajirao earned him a different identity in the world of historical cinematic entertainment. Ranveer as Peshwa who’s married to Kashibai (Priyanka Chopra) falls in love with Mastani (Deepika Padukone, a Muslim-Hindu princess from Bundelkhand. Directed by Sanjay Leela Bhansali, the heart-wrenching love story that occurs despite the societal conflict Bajirao faces between Mastani and his wife was endearing enough to watch. Ranveer indeed moulds very well into the character as he brings Peshwa to life, while his dialogue delivery manages to leave an impeccable mark on the audiences. 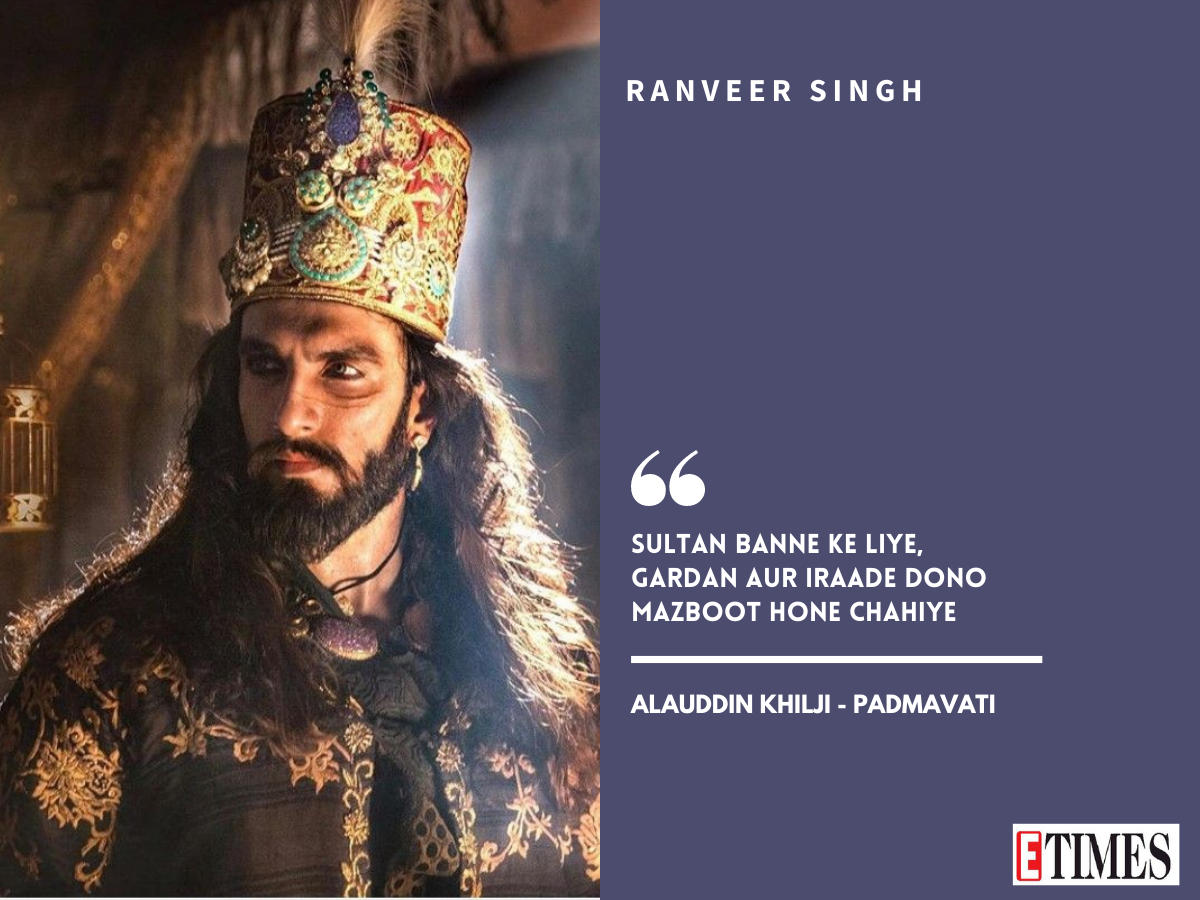 Another spectacular historical drama helmed by Sanjay Leela Bhansali portrayed Ranveer as the tyrant and former Sultan of Delhi, Alauddin Khilji. His character passes morality and ethics but at the same time can be ruthless when it comes to falling in love, as he preys on Chittor’s Maharani Padmavati which was portrayed by the ever-charming Deepika Padukone. He is strong-headed, dwelling with a persistent desire to win the queen, make his own, under any circumstances. Ranveer’s portrayal as Khilji found him as one of the most terrifying on-screen villains of Bollywood. The movie also starred Aditi Rao Hydari and Shahid Kapoor in pivotal characters. 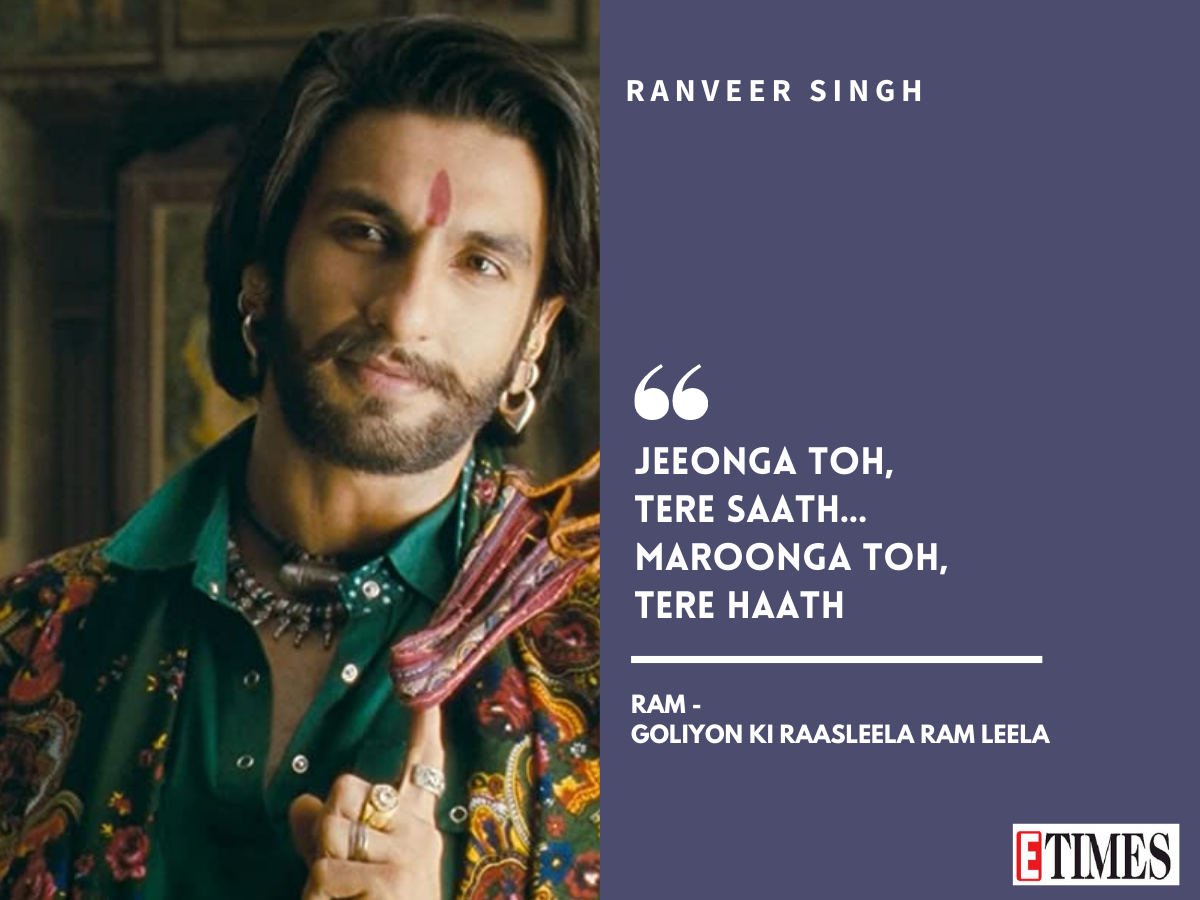 The Bollywood adaptation of Shakespeare’s Romeo and Juliet, finds Ranveer Singh essaying a charm and chirpy personality with a pinch of Gujarati flavours. He is a free-spirited-loud human being, who’s smitten by Leela (Deepika Padukone) – the daughter of a different community. Both the lovers find themselves sacrificing in the end, to stay united and do justice to their unconditional love. Back in 2013, the Ram-Leela emerged as one of the highest-grossing Indian films. The movie also starred Supriya Pathak, Richa Chadda, Sharad Kelkar in relevant characters. 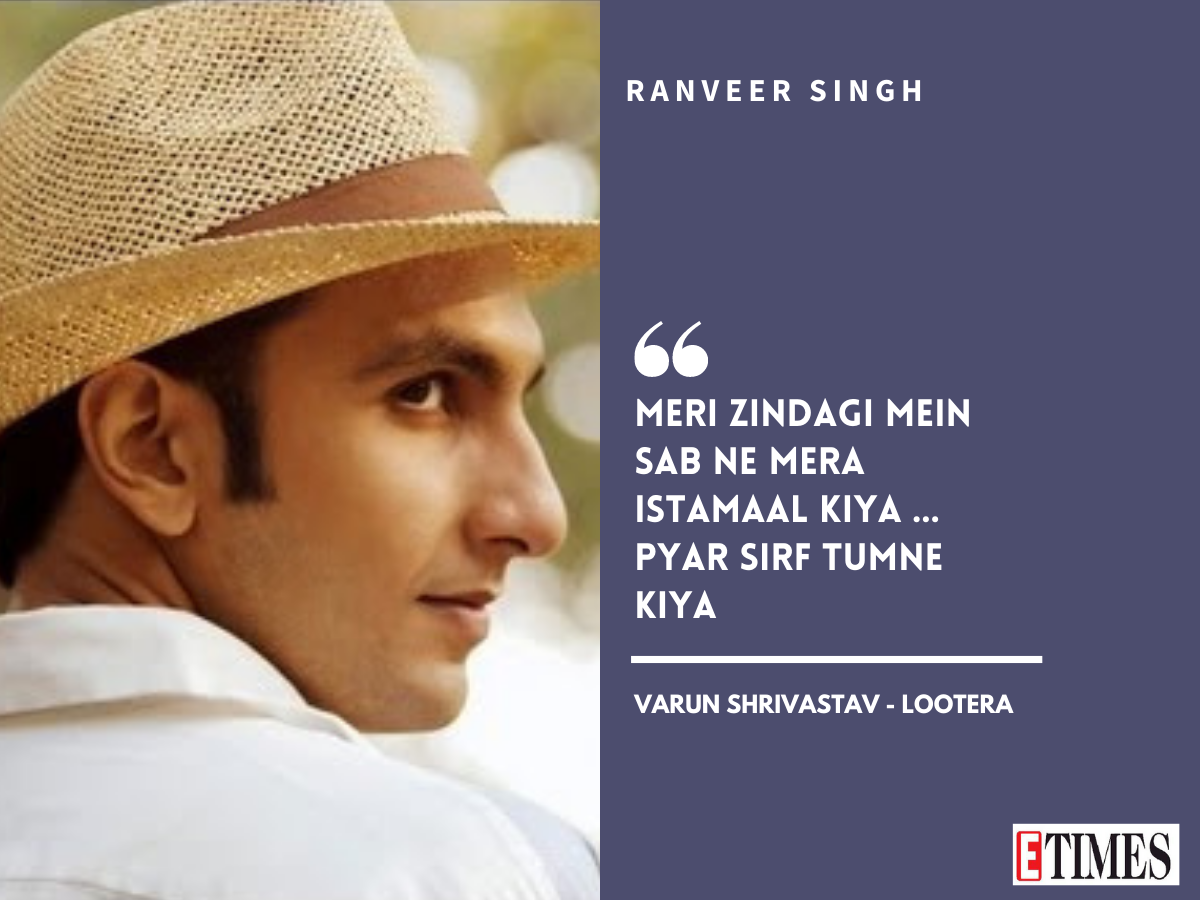 In the movie ‘Lootera’, Ranveer portrays the role of Varun Shrivastav, who is a thief disguised as an archaeologist. For the sake of wealth, he ends up abandoning his bride ( Sonakshi Sinha ). Throughout the movie, his charming element remains intact for a seemingly noble and decent young man. Helmed by Anurag Kashyap, the art-house period romance is inspired by O. Henry’s 1907 short story ‘The Last Leaf’. Ranveer’s performance earned him several accolades from audiences and critics alike. 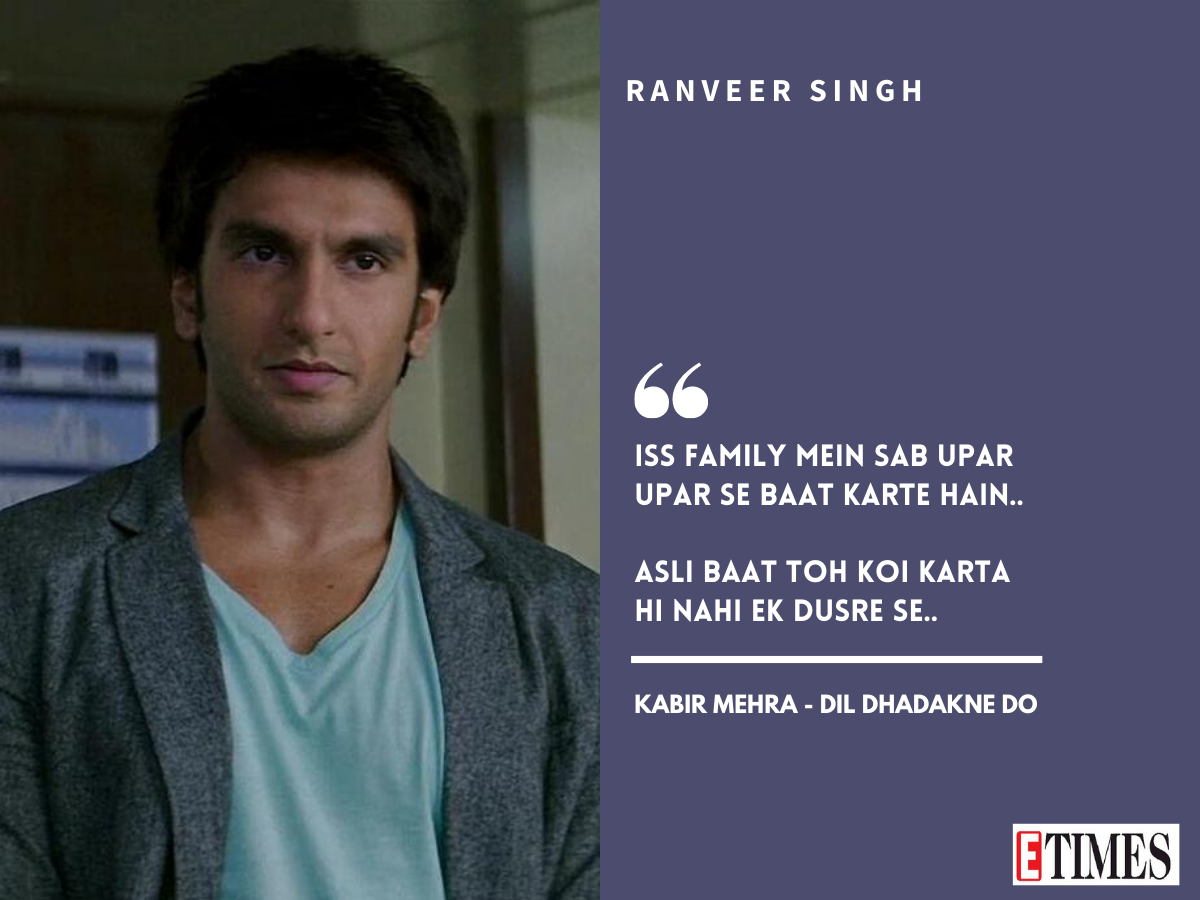 Ranveer’s portrayal as Kabir Mehra is one of the most relatable characters for today’s youth. He is a young charming man, and a loving and supportive brother, one could ever ask for. When it comes to the matters of the heart, he is naive. He is constantly torn between his dreams and duty and is forced to marry a rich business man’s daughter for the sake of a better business deal. One could easily connect and understand the frustration and the emotional troubles, he wasn’t vocal about. Helmed by Zoya Akhtar, the movie was no less than a star-studded affair, as it featured an ensemble cast, consisting of Anil Kapoor, Shefali Shah, Priyanka Chopra, Ranveer Singh, Anushka Sharma, Vikrant Massey and Farhan Akhtar. 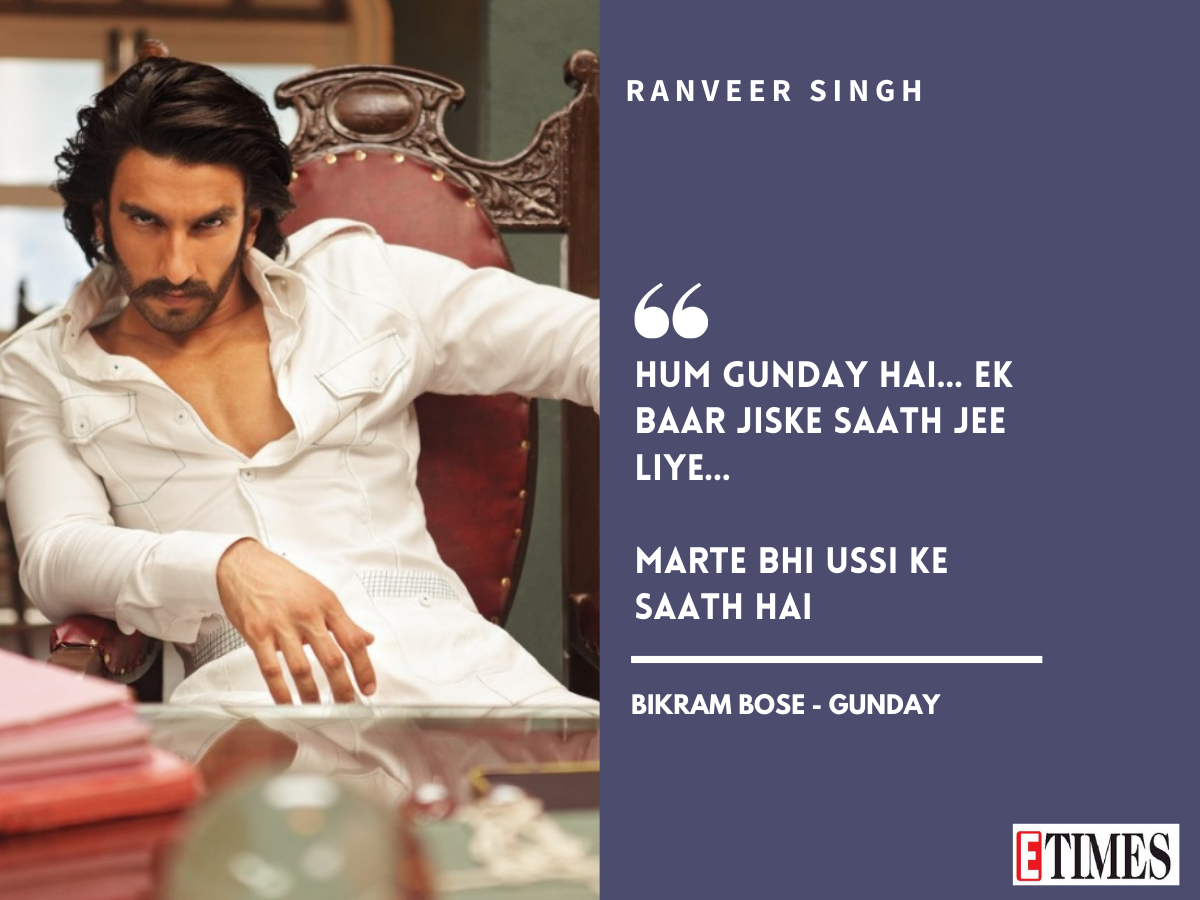 Helmed by Ali Abbas Zafar, the movie revolves around the period of independence during the partition in Bangladesh after the 1971 war. Amongst the many affected at that time, were two orphans Bikram Bose and Bala Bhattacharya. Ranveer Singh portrays the character of one of the orphans – Bikram, who offers himself as a sex slave when Bala is being chosen by the army officers for the purpose. In this way, both soon plot a plan to kill the officer in which they succeed. They soon become like brothers and partners in crime, but their bond goes for a toss when they fall in love with the same woman – a cabaret dancer portrayed by Priyanka Chopra. The movie garnered mixed reviews by the audiences, but Ranveer Singh’s on-screen energy is somethings, fans still talk about and cherish. 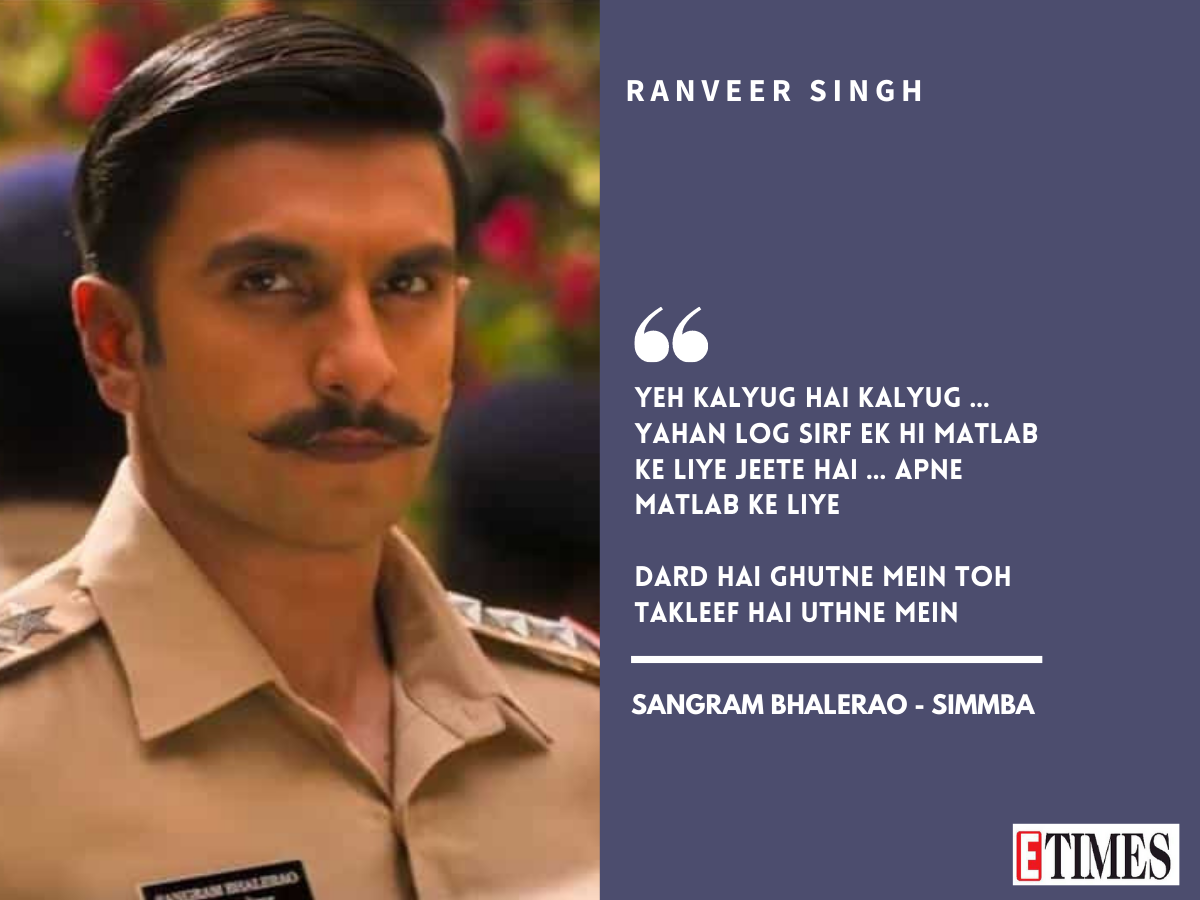 Rohit Shetty’s directorial portrays Ranveer Singh as Sangram Bhalerao popularly known as Simmba – a corrupt police officer working for an influential smuggler. Born and brought up as an orphan, he finds himself motivated by observing how policemen make money in the form of bribe. However, things take a turn when he decides to avenge a woman who was assaulted by one of the smuggler’s brother. This becomes a life-changing event for Sangram allowing him to choose the righteous path. Ranveer’s acting successfully struck a chord among the audience. The movie which is an official remake of the 2015 Telugu film ‘Temper’ also stars Sara Ali Khan and Sonu Sood in pivotal characters.

Facebook
Twitter
Pinterest
WhatsApp
Previous articleEmraan Hashmi reacts to a Bihar student naming him as father in his admit card and it is sure to leave you in splits – Times of India
Next articlePhotos: Kajal Aggarwal’s birthday wish for her beloved father is simply too sweet for words – Times of India