After a week of filmy pre-wedding festivities, Niharika Konidela tied the knot with Chaitanya Jonnalagadda in a glitzy ceremony on Wednesday. The grand 16th century palace provided the perfect backdrop for the wedding which lived up to the theme: ‘A Royal Affair’. And Niharika looked every bit the ‘Mega Princess’ in a specially weaved red and gold Kanjeevaram pattu saree paired with a bright green embroidered blouse. With her hair parted in the middle and tied back in a plait and flowers in her hair, the actress looked every bit the south Indian bride.

The actress later changed into an onion-pink and gold saree with a matching intricately embroidered blouse, embroidered net veil in her head. Chaitanya opted for a brown and gold brocade sherwani that looked as royal as the bride’s two looks.

Red flowers, green foliage, lotus motifs in gold and a large mirror that read ‘Welcome to the wedding of Niharika & Chaitanya’ with velvet brocades draping the columns at the entrance greeted guests. Once in, a massive, intricate mandap in gold with fresh flowers lending warmth took centre-stage. On both sides of the mandap and across the corridors of palatial venue, tables and chairs were set under red drapes, with fresh red roses and foliage as centre-pieces. Guests were seated on intricate white chairs at long tables, with food served on gold plates and table-settings.

Actor Naga Babu, the bride’s father, got emotional as his little baby was all set to tie the knot. “It looks like the end of an Era….Serious nostalgia hit me all again…It feels like the first day of her school…just that she wont be returning by evening. It took years to make peace with the fact that my baby girl is all grown up to go to school and I can’t play with her 24 x 7..Just donno how long it will be this time….’Only time will decide.’ Already missing you Niha thalli (sic),” the actor wrote in an emotional social media post.

NIHARIKA, CHAITANYA HAVE A BLAST AT THEIR HALDI

The wedding venue was teeming with activity as soon as the D-day arrived. The bride and groom made a splash — both literally and figuratively — at their haldi function on Wednesday morning. Niharika dazzled in a bright yellow saree while Chaitanya looked dapper in a matching kurta. All the other guests were seen having a blast as they splashed the bride and groom with buckets of water. “White was chosen as the dress code for all the guests while the bride and groom made a splash in their yellow outfits. The idea was to make them pop out from the rest, and they sure did. The bride later changed into a beautiful kurta-palazzo set in the same colour,” shares Ashwin Mawle, Niharika’s stylist for the wedding. Actor-politician Pawan Kalyan, who had missed the couple’s engagement in August, made a late entry as he landed in Udaipur on Tuesday night for the mehendi ceremony. “The last piece of happiness arrived too, to make this moment complete,” Naga Babu shared after Pawan arrived at the wedding venue. Actors Varun Tej, Ram Charan and Allu Arjun were later spotted getting clicked with their Kalyan babai. 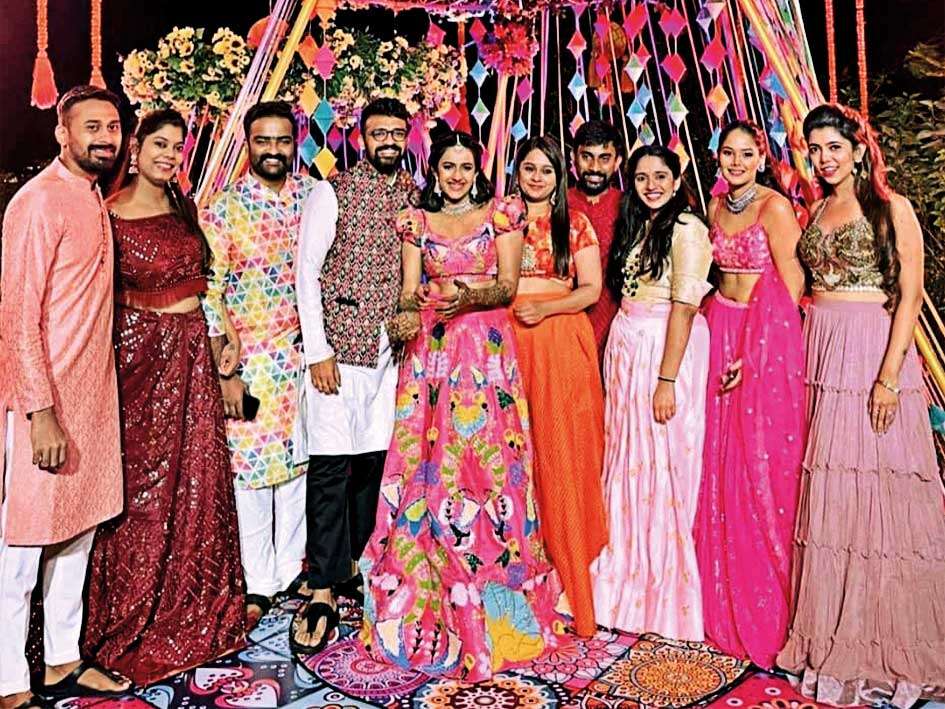 NIHARIKA’S FRIENDS SURPRISE HER WITH A FLASH MOB

Before the wedding rituals began, the bride and groom were treated to a night full of filmy entertainment on Tuesday with a starry mehendi function that was followed by a sundowner, where the family of actors shook a leg. Speaking to Hyderabad Times, director Pranith Brahmandapally, one of Niharika’s closest friends, said, “All of us surprised Niharika with a flash mob. We had rehearsed this for a while without her knowledge and she was totally surprised by it. The flash mob was done to welcome her to the venue and she absolutely loved it.”